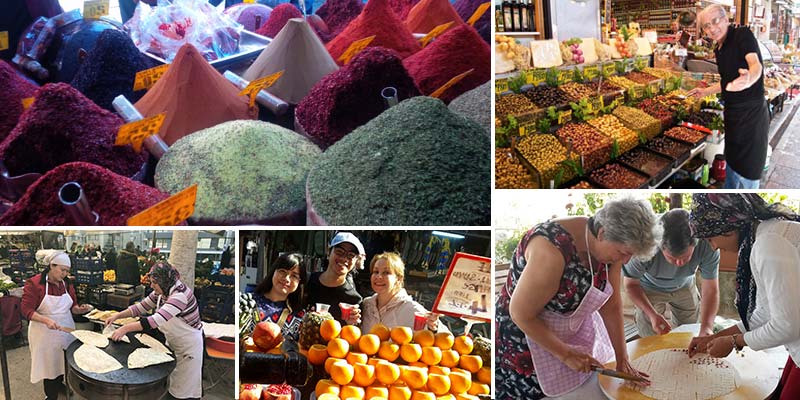 Experience Turkey through the eyes, lives and tastes of its people. Sample its diverse food and culture. Meet local people and share their stories, cuisine and passion for living - like you have never done before. Visit local markets and ethnic restaurants and delight in the sounds and sights at the meeting of two continents.

Arrival in Istanbul , the only city in the world built on two continents, providing a unique link between East and West and guardian of the treasures of three empires of which she has been the capital. Napoleon said that if the world were a single state then its capital would be Constantinople. Even today, amid the traffic-choked streets of modern Istanbul, among the high-rises, the steep alleys and the glowing ancient churches and mosques, you can still feel exactly what he meant. Overnight in Istanbul.

Today you will visit the Blue Mosque, a famous 17th century mosque that dominates the Istanbul skyline. Hagia Sophia, the church of the Divine Wisdom, which was a church (circa 548 AD), then a mosque. The Theodosius Cistern (known as Şerefiye Sarnıcı in Turkish), which was built by Roman Emperor Theodosius II between 428 and 443 to store water supplied by the Valens Aqueduct. The area is about 148 by 82 feet and the roof is supported by 32 marble columns about 30 ft high. For lunch you will taste delicious kofte -meatballs- at a specialized restaurant operating since 1920. Then you will drive to the pier for your private cruise on the Bosphorus. Upon disembarkation you will proceed to a Turkish home to enjoy a Hands- on cooking class learning to cook home-style, family recipes and taste what you have cooked. A truly unique opportunity to experience Turkish hospitality and local home life. Overnight in Istanbul.

Today you wil visit Topkapı Palace the residence of the sultans for almost three centuries. It is located on the promontory jutting out between the Bosphorus and the Golden Horn. Being the imperial residence of the sultan, his court and harem, the palace was also the seat of government for the Ottoman Empire. In the Treasury section, you will see the 7th biggest diamond in the world, the “Spoonmaker’s Diamond” and the Harem is a vast labyrinth of rooms and corridors once occupied by the black eunuchs, concubines, the Sultan’s mother and the Sultan himself. You will visit The Palace Kitchens, Helvahane and Quarters and learn about our culinary culture of 400 years. Lunch will be at a restaurant where you will taste Ottoman Palace recipes. After lunch you will visit Süleyman the Magnificent Mosque created by the great architect Sinan. The Mosque of Suleyman the Magnificent is one of his two most impressive achievements, carrying mosque architecture to its grandest development. Then explore the famous Grand Bazaar. A baklava shop where you will taste the best Baklava in town will be your last stop for the day. Dinner will be on own. Overnight Istanbul.

After check out today you will start the day with a walk through the Spice Bazaar, an extensive market which was built in the 17th century to finance the upkeep of the nearby mosque - Yeni Cami. The bazaar is often referred to as the "Egyptian Market" due to the fact that spices used to come to the market from India and Southeast Asia via Egypt. During the tour you will visit the Rustem Pasha Mosque, another skillful accomplishment of the architect Sinan, the Rustem Pasha Mosque was built in 1561 on the orders of Rustem Pasha, Grand Vizier and son-in-law of Suleyman the Magnificent. Exquisite Iznik tiles panel the small and superbly proportioned interior. Take a ferry ride to the other side of the river that separates the European and Asian parts of Istanbul to explore the famous open-air street market of Kadıkoy. Notice the big difference in atmosphere between the Spice Market and the Kadıkoy which is more in tune with the way most people in Istanbul cook and eat. Indulge yourself in the huge variety of seasonal fruits and vegetables, with plenty to discover for the "foodie." Feel the real bazaar shopping experience with the fishmongers, bakers, butchers and grocers singing out to attract you to their stall. Take your time and explore the many pastry shops, Turkish delight and deli stores and the aromatic spice stands. There is plenty to see and buy, with information and recommendations available. Lunch will be served at one of Turkey’s foremost cook’s Çiya restaurant. The chef is devoted in letting the world know about the glorious food of his homeland. The ingredients used in the dishes travel from South Eastern Anatolia to arrive at your plate in Istanbul: aromatic red pepper, pistachios, chickpeas, olive oil and pomegranate molasses. After lunch we will head for the airport for our flight to Cappadocia. We will be transferred to our hotel upon arrival.

In Cappadocia we will focus on the very particular culture and foods of Anatolia. Today we will be cooking in a village home with local village women. They will show us how to make stuffed vine leaves and manti, a traditional dish whose heritage stretches back in to the Central Asian origins of modern Turkey. You will taste what you have cooked for lunch. After lunch will introduce you to the lunar landscape of Cappadocia at Dervent Valley, and we head on to Zelve Open Air Museum, which is one of the earliest inhabited and latest abandoned monastic settlements of Cappadocia. Seeing the best examples of the fairy chimneys at Pasabag Fairy Chimneys Valley, we drive further to Avanos. From here you will stop at Avanos, a centre of terracotta art since 2,000 BC, for a demonstration in a traditional pottery workshop. Then we will try our hands at it under the supervision of a master potter. We will end the day by relaxing at one of the most spectacular valleys of Cappadocia with its different rock formations in a variety colors and enjoy the sunset while sipping delicious Cappadocian wines. Dinner will be served at one of our favourite restaurants in Cappadocia. Overnight in Cappadocia.

Early morning optional balloon ride - transfer to the balloon launching site to meet the balloon crew. The gentle and stable wind conditions are ideal during the first few hours of the day in Cappadocia. It is also the ideal time for photography, with splendid colours and contrasts. The deep canyons and gentle winds carry you over places that could never be reached except by balloon. After flying over Cappadocia for about one hour, you will land to an awaiting champagne breakfast! After breakfast you will visit the famous Goreme Open Air Museum to see the best examples of Byzantine art in Cappadocia. These are found in rock-cut churches with frescoes and paintings dating from as early as the 10th century. After lunch in a local restaurant you will then explore an underground city, one of the largest and deepest of Cappadocia’s many such settlements. Then while sipping your wine you will enjoy a demonstration and explanation of Turkish carpet making techniques, symbols and different types of carpets. Later we will visit the Saruhan Caravanserail to watch the Whirling Dervish Sema Ritual. Tonight is free. Overnight Cappadocia.

After a leisurely morning join a Turkish Art of Marbelling (Ebru) workshop. Rest of the day on your own. In the afternoon we will drive to a village where they will show us how they do grape molasses and homemade baklava. After a light dinner we will take an evening flight to Izmir Overnight near Ephesus.

After breakfast we will proceed to visit Ephesus, one of the most incredible archaeological wonders of the world. We will then proceed to Kusadası for lunch in an ecological farm that houses the best restaurant in the area and visit the Oleatrium, an Olive and Olive Oil Museum where we will be travelling 2500 years in time. After having a feast, we will take you around the farm so you will see how they dry their vegetables under the sun, how they make tomato or pepper paste, and the making of many different organic jams. The farm tour will end at the Olive Oil museum where you will see how mankind first discovered that olives were edible and how olive oil was used from the beginning of time until today. Dinner at one of our favorite restaurants. Overnight near Ephesus.

Morning at leisure. Before lunch visit the Ephesus Archaeological Museum in Selcuk. Lunch at an eco conscious local cuisine restaurant. We will then drive you to Bodrum after your visit. Overnight in Bodrum.

Today after breakfast we will go around the Bays on a Goulet. Goulets are traditional wooden yachts first built in Bodrum for fishing and sponge hunting, but with the rise of the Blue Cruise concept, Goulets became spacious motor- sailing yachts for people to enjoy a cruise in the untouched bays around the Aegean coast of Turkey. It is a perfect way to enjoy swimming in the blue waters as well as to try more of the local cuisine on board. After the cruise we will return to the hotel. Dinner and Overnight Bodrum.

Enjoy a lazy breakfast and a day of relaxation... Early afternoon we may get together to drive into center of Bodrum to walk through some of the shopping areas for a couple of hours. Then you will visit the famous Crusaders Castle and the Underwater museum. After spending some leisure time in town, enjoy a leisurely supper together before taking your flight to Istanbul. Overnight Istanbul.

Take the flight back home. 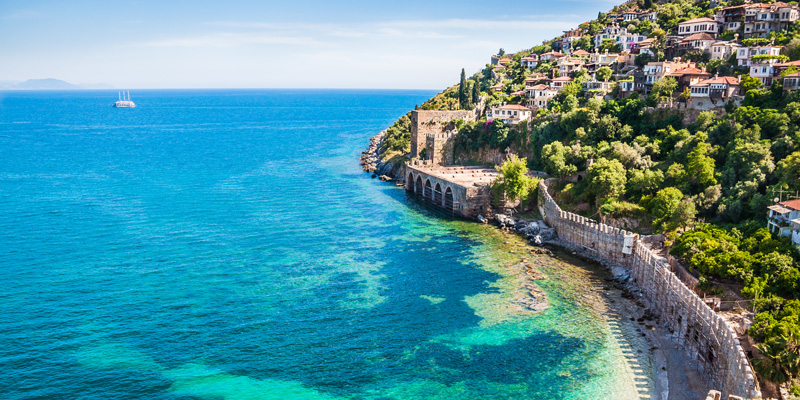 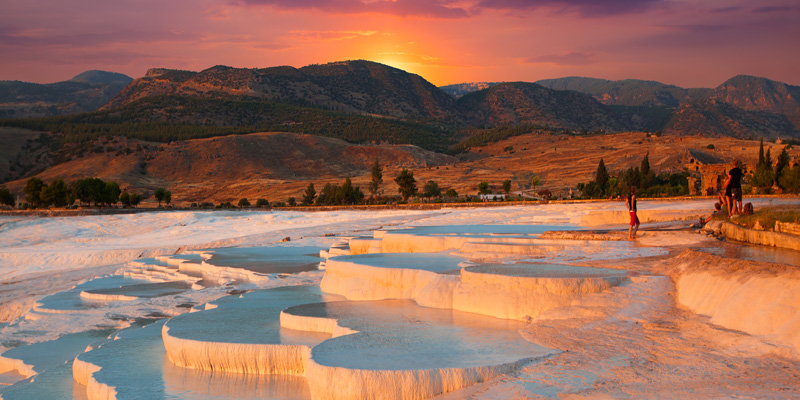 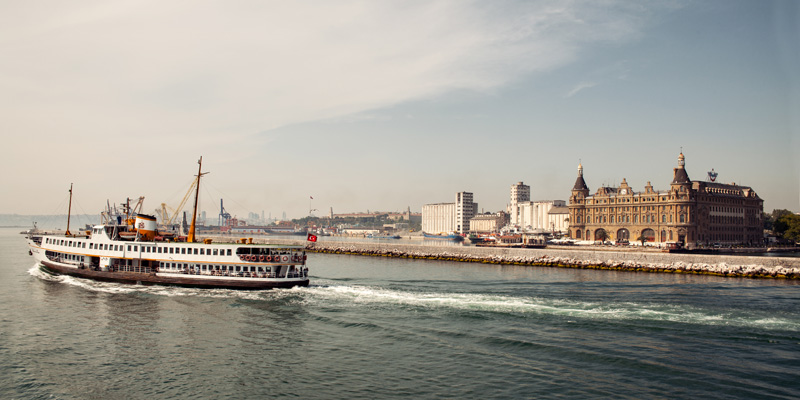